NAIFA Washington Says Goodbye to The "First Lady" of WSALU 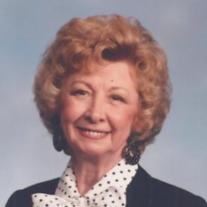 Nancy was born October 14, 1929 in Urbana, Illinois and moved to the Tri-Cities as a young girl in 1943. She was married to her “Knight in Shining Armor”, Howard Simons and raised five children in this area. Howard passed away in 1973.

In her own words: “I’m almost a native of the Tri-Cities. My family was among the pioneers of the Hanford Atomic Project. We were the seventh trailer to begin what became the largest trailer court in the world. I have fond memories of both Richland and Pasco high school days.

It was here that I met and married Howard. For 28 years I had an active, happy home life with five children growing up and a remarkable man to love and share it with. We broke raw land and farmed for ten years north of Pasco. We moved to Kennewick in 1960 and I’ve been here since.

When Howard died, I started my career in Life Insurance with a full understanding of what a family faces
when a father dies unexpectedly. I was scared to death, a housewife trying to compete in a man’s profession. I learned that if we see our dream as a reality, set our goals for it, and work hard, we can make it – no matter who we are.”

Nancy retired in 2008. Her awards, honors and accomplishments were many, holding offices at local, state and national levels. The highlight of her career was becoming the first woman President (1990-91) of the Washington State Association of Life Underwriters (WSALU), now known as NAIFA Washington.

Her loving companion of over twenty years, Hec Hancock, remembers that she learned to ski in her sixties as they toured the country’s ski slopes. They traveled the world together and made many happy memories.

Nancy enjoyed gourmet cooking, entertaining, gardening, sewing, crafting, decorating, and “organizing”. Her home was warm and welcoming. Her garden and her family were the source of her joy.

(Nancy was truly a pioneer and she will be greatly missed as she touched so many lives. I was one of those lives as it was my privilege to serve her during her presidency. She was a fine lady and good friend. Cheryl McCracken, retired Administrator, WSALU/NAIFA-Washington 1977-2008)